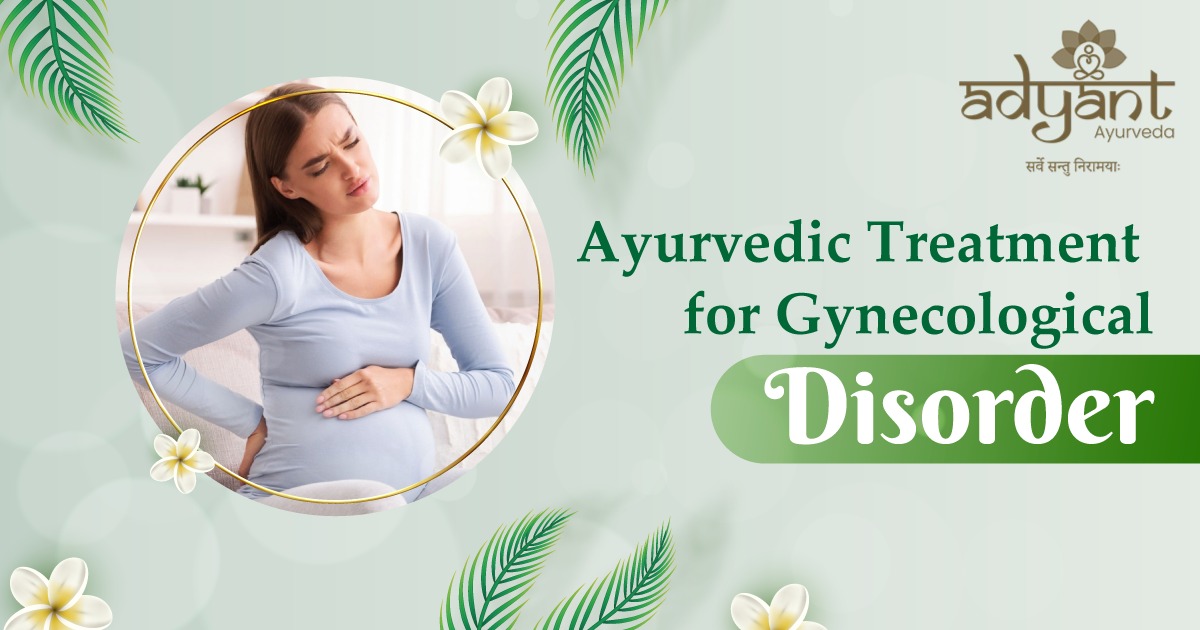 Woman is a multifaceted multitasker who caters to all, be it family, profession, or society. In this run how far she takes care of her health is the primary concern. Here we will discuss Gynecological disorders and Ayurveda management.

The constant run added on with the pressures of work along with stress slowly starts to affect her health which can manifest in many forms. Her vitality can be at risk as most of the time her hormonal balance is at stake. The imbalance in hormones along with physical over-exertion can alter the rhythm of her uterine functions leading to changes in her menstrual cycle, fibroids, dysmenorrhea, PCOD, heavy menstrual bleeding, DUB, endometriosis, and infertility.

Let’s have an overview of some of the gynecological issues and their respective approaches to Ayurveda.

It is one of the primary concerns in a woman of reproductive age. Abnormal growth in the uterine cavity also known as Garbhashaya granthi occurs during childbearing age. Most of the time, fibroids do not show any symptoms but when a patient complains of excessive bleeding with cramps, repetitive abortions, or dull pain in the lower part of the abdomen, the presence of a fibroid is assessed using ultrasonography.

Fibroids can be correlated to Granthi. Ayurveda attributes it to Vata and Kapha doshas and sometimes to pitta dosha based on the symptoms.

When a cluster of complaints like abnormal weight gain, irregular or delayed cycles, hair fall, blackish discoloration near the neck region, and facial hair growth are observed, most of the time they are related to PCOD or polycystic ovary. Ayurveda attributes this condition to the derangement of Kapha dosha most of the time associated with pitta dosha.

When the menstrual cycles are associated with pain and cramps, the severity of which affects the day-to-day activities, it can be attributed to Dysmenorrhea or Kastartava. Although it is not mentioned as a disease in Ayurveda it is discussed as a symptom in associated gynecological disorders. As pain is the main factor, derangement of Vata dosha is the primary cause.

When abnormal uterine bleeding occurs with no specific cause it is termed DUB. There may be an abnormal pattern in terms of duration or quantity or frequency of bleeding. This can result in mental and physical strain and stress and if not addressed on time can lead to major health issues.

It is termed Asrugdhara in Ayurveda.  When Vata and pitta doshas are vitiated at the level of rasa and Rakta Dhatus it results in excessive and irregular patterns of bleeding resulting in blood loss, weakness, fatigue, back pain, etc.

Many times a major cause of infertility, it affects 10-15% of women of childbearing age. Painful menstrual cycles, lower abdominal pain, irregular bleeding, or severe bleeding are some of the conditions associated with endometriosis.

Ayurveda considers this to be a v\Vatiki yoni Roga, primarily a Vataja imbalance in yoni i.e, the female reproductive system, most of the times associated with pitta dosha.

A normally functioning fallopian tube is essential for natural conception. Due to dysfunctional fallopian tubes or blockage in the tubes proper passage of ovum is hampered amounting to be the major cause for fertility.

Ayurveda refers to tubal blockage as Srotovarodha basically a derangement of Vata and Kapha doshas.

It is every woman’s dream to conceive and have a healthy progeny. When a woman of childbearing or reproductive age is not able to conceive, or if there is difficulty to carry the pregnancy to full term, and if there are multiple miscarriages these may result in infertility.

All the above-mentioned conditions like PCOD, endometriosis, fibroids, blocked fallopian tubes etc can be directly or indirectly associated with infertility.

The treatment protocol of Ayurveda is based on the Prakruti and Vikruti i.e imbalance in doshas. The aim of the treatment is to bring a balance in the deranged dosha and maintain a healthy reproductive system.

Medications are most conducive to reproductive health and supportive of bodily humor.

Panchakarma plays a major role in all these issues.

If the involvement of Kapha dosha is predominant, So Vamana is primarily advised followed by other kriyas.

When there is predominance of pitta dosha, virechana along with pittahara measures are advisable.

A unique therapy in Ayurveda, in which the ailments of the reproductive system are aimed with intervention directly into the yoni or uterus.

In an absolutely sterile environment, sterile medications it Kashayams or Tailam, or Ghritams in minute quantities are instilled into the uterus from the fifth day of the cycle for 3-6 days either continuously or consecutively. The choice of medication is based on the prevalent condition and the doshas involved.

A one-stop solution to most gynecological disorders especially in infertility blocked fallopian tubes or uterine fibroids.

Ayurveda has a detailed description of yoni Roga or disorders of the reproductive system. Ayurveda treats all kinds of gynecological disorders as well as give best solution to live a healthy life

A multifaceted approach with medications, therapies, and Panchakarma can be beneficial to resolve the disorders and promote a healthy reproductive system. Ayurveda treatment helps to get relief from Gynecological disorders with Proper Panchakarma treatments as well as, internal medications, Further to that diet and lifestyle modifications are playing an important role. Along with all this proper exercise is also mandatory