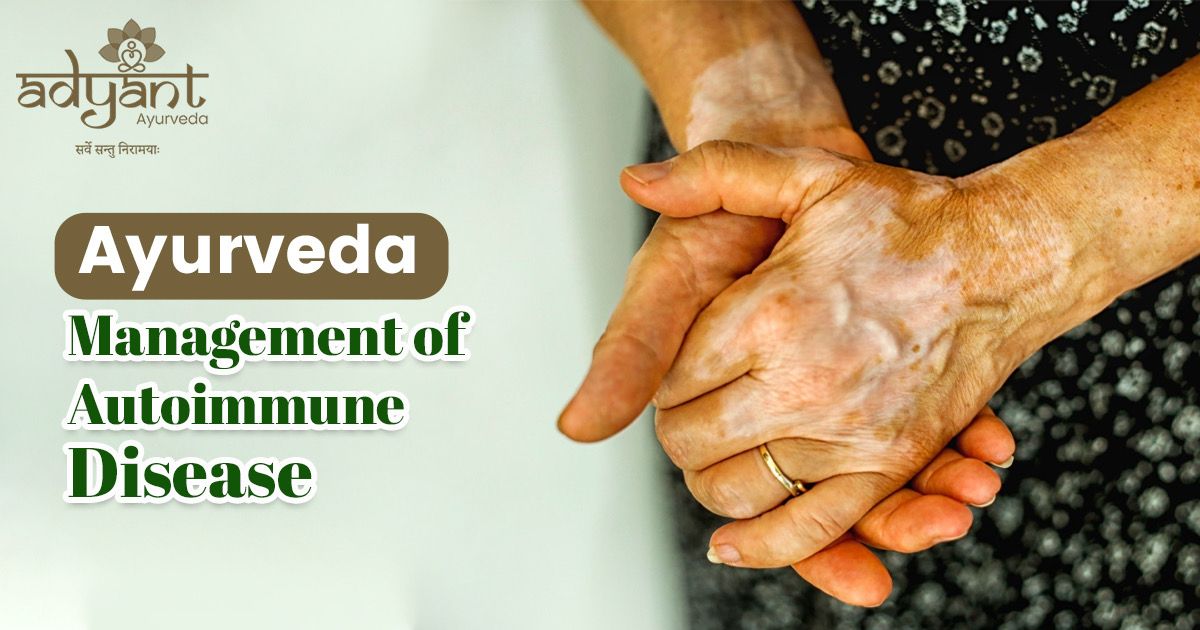 Autoimmune disorders are those where the body’s own immune system acts against its own body activities. This means to tell that ‘the things which are meant to protect and take care of us in our body turn against our system and start destroying it. Here will discuss Ayurvedic treatment for Autoimmune disorders and how it’s beneficial

This can be of two kinds –

Because of these reasons the body’s ability to fight against bacteria, virus, and pathogens decrease and makes the body very susceptible to infections. Due to many known and unknown factors, the body’s immune system may begin to produce antibodies that instead of fighting against invaders start attacking the body’s own tissues.

A few early symptoms of many autoimmune diseases are

Individual disorders may have specific signs and symptoms which are unique to the disease.

Researchers around the world have been constantly looking at the proper understanding of the reasons behind the autoimmune activity and they have listed a few reasons. They are

Here the immune system produces antibodies that attach to the lining of joints causing inflammation, swelling, and pain. If untreated Rheumatoid arthritis may cause permanent damage to joints.

The insulin-producing cells are attacked by antibodies and they get destroyed. Patients with this condition require insulin injections to maintain optimal sugar levels in the body.

The nerve endings controlling muscles in the legs and sometimes the arms and upper body gets attacked by the immune system and causes weakness, and tingling in hands and in feet, and in some situations, the symptoms are so severe that the body might get paralyzed completely.

Here the lining of the intestines is attacked by the immune system causing episodes of rectal bleeding, the urgency to pass stools, abdominal pain, and fever. Ulcerative colitis and Chron’s disease are the two major types of IBD.

People with this problem develop autoimmune antibodies that attach to tissues throughout the body affecting joints, lungs, blood cells, nerves, and kidneys.

In this condition, the immune system produces antibodies that activate the thyroid gland to produce an excess amount of thyroid hormone into the bloodstream. The chief symptoms of this condition include bulging of eyeballs, weight loss, irritability, nervousness, weakness, rapid heart rate, and brittle hair.

In this condition, the antibodies produced by the immune system attack the cells of the thyroid gland and slowly destroy the cells that produce thyroid hormone. The main complaints are weight gain, fatigue, constipation, dry skin, depression, and sensitivity to colds.

The antibodies produced by the immune system affect the nerves and due to this the nerves are unable to stimulate the muscles properly. The patient experiences weakness which gets worsened after the activities.

From time immemorial Ayurveda has been talking about immunity in its own language and has offered rich concepts and understanding of the same. . Now let us see what immunity is. Immunity is the inbuilt capacity of the body to resist harmful micro-organisms from entering their body and fighting against the pathogens if entered thereby resisting the manifestation of disease.

Vyadhikshamatva vis-a-vis immunity against a disease can be defined as a combination of – vyadhi bala virodhitvam i.e. components of the body opposing the strength of a disease and vyadhi utpatti pratibandhakatvam – capacity of the body to check or oppose the process of formation of the disease.

When the body or components of the body programmed to do this job doesn’t do it properly it will lead to lessened immunity which will lead to the causation of many diseases in the long run. Many things contribute towards immunity as per Ayurveda – balance of doshas and tissues and the digestive fire, proper and timely excretion of the excreta/waste products, balance of mind, senses and their perception and pleasantness of the soul, the balance of ojus and many more factors.

Understanding autoimmunity too is based on the same factors. We need to understand how the same components meant for taking care of us have turned hostile and have started damaging our system and causing many diseases.

The components of autoimmunity are as below explained –

. The tridoshas are the most important functional components of our body. They also determine our physical constitution or body type. All functions of the body are carried out in a smooth and uninterrupted way when the doshas are in a state of balance. . Dosha aggravation and imbalance will cause autoimmune disorders.

Ashraya Ashrayi Bhava – Each dosha will have a residence in one or more tissues. Kapha resides in lymph, muscles, fat, bone marrow, and semen (also in urine and feces). Pitta resides in the blood (also in sweat). Vata resides in bones. But these doshas will not damage the tissues. They share a compatible relationship. But when dosha aggravation is severe and tissue strength is less, the doshas invade the tissues and damage them causing many diseases.

Kapha imbalance – One of the functions of balanced Kapha is bestowing ‘vyadhikshamatva’ vis-a-vis immunity. When there is Kapha imbalance it will put Vata and pitta into a state of imbalance. This will lead to many degenerative and inflammatory diseases of autoimmune origin.

Mala sanchaya – accumulation of waste substances in the body

Ojas depletion – Ojas is the essence of all tissues which determines our immunity to a greater extent.

Nidana Parivarjana – identifying the causative factors of the concerned autoimmune disorder and isolating them (keeping them away).

Administration of Rasayanas – tissue rejuvenators and immune-modulating therapies and medicines.

Psychotherapies and counseling, mindfulness therapies, Yoga and meditation sessions, and other stress-relieving measures

We at Adyant Ayurveda follow the traditional Ayurveda methods of identifying and treating autoimmune disorders in a comprehensive way by advising effective and customized therapy (Panchakarma), diet, medicines, and lifestyle changes.

Experience to believe it.You can meet our team of  best Ayurveda doctors to understand about how Ayurveda works for autoimmune disorders.